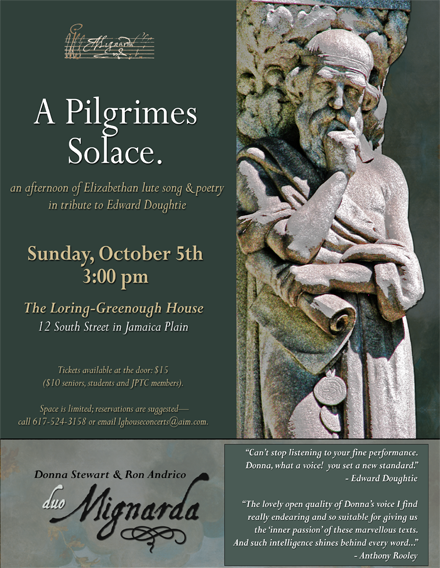 The Loring-Greenough House
12 South Street in Jamaica Plain, Massachusetts
Tickets are available at the door: donation $15 ($10 seniors, students and JPTC members). Space is limited; reservations are suggested—call 617-524-3158 or email lghouseconcerts@aim.com.

Mignarda returns to the Sunday Afternoon Parlor Concert Series at the Loring-Greenough House, the last surviving 18th century residence in Sumner Hill, a historic section of Jamaica Plain, Massachusetts. Built in 1760, the venue listed in the National Register of Historic Places and has been a historic house museum since 1926. Its beautiful period decor and intimate size make it an ideal setting for lute song.

With the music of John Dowland as the centerpiece, this program probes the perfect marriage of poetry and music - with texts both light and dark - from the Golden Age of English lute song. Music by John Dowland, John Danyel, Thomas Campion, Thomas Morley, Robert Jones and others.

The concert is a tribute to Edward Doughtie (1935-2014), whose work in the field of the literary sources of English lute songs became a standard reference, and was the inspiration for many of Mignarda's poetically-themed programs. The program will conclude with a modern lute song composed for Mignarda by Edward Doughtie.   More information at www.mignarda.com

"Congratulations on a really exquisite rendering of your selection from 'Pilgrimes Solace'! Donna, I love your expressive, plaintive quality - and such intelligence shines behind every word and sentiment."
- Anthony Rooley, Director, Consort of Musicke; Professor, Schola Cantorum Basiliensis (Basel, Switzerland)

Thanks for your way to make music: it's full of good taste, that is something rare in this strange world of the "early music". And thanks to the singer, for her beautiful voice and elegance.
- Marco Beasley, Accordone (Bologna, Italy)

"I believe that you and Donna form the pre-eminent lute song duo of our time."
- William Samson (Scotland)

"My other band crush this year is Mignarda. What can I say? Ron Andrico and Donna Stewart have captured my heart. The depth and emotion in their playing is nearly overwhelming. I have learned a lot from them and we've made some stunning recordings together. You need to hear this. It will change you..."
Will Russell, Owner, Recording Engineer, Electric Wilburland Studio (Newfield, New York)

"Your concert was revelatory in several ways, especially as it challenged our ears and hearts to enter a realm difficult to access these days, where subtlety and elegance trump flash and flamboyance, and content, rather than effect, is primary."
Rev. Cullie Mowers, Rector, St. Thomas Episcopal Church (Slaterville Springs, NewYork)

"Your music was very moving as were the two of you interacting musically & otherwise. Entirely appropriate to the gentle nature of the music itself, but also a tribute to the wonderful sensitivity which you bring to it."
- Alan Hoyle (UK)

Donna Stewart & Ron Andrico, better known as Mignarda, are one of the few professional lute song duos in the US. Dedicated to music of the 16th century, Mignarda's engaging approach has set a new standard for interpretation, authenticity and musicianship. Based in rural upstate New York, Mignarda performs throughout the US with an international audience for their ten critically-acclaimed recordings and a growing series of editions of historical music for voice and lute. Mignarda's CD, Divine Amarillis, received the 2009 JPF Best Classical Vocal Album Award, and the duo maintain an active schedule in touring, recording and teaching. In addition to live performances, their music has gained international exposure through radio and television broadcasts across the US.

Mignarda specialize in performing music that resides in the grey zone between folk and art music, with interpretations that follow the renaissance ideal of 'moving the passions' of the listener. They recently celebrated their 10-year anniversary with release of their 9th CD, music from John Dowland's A Pilgrimes Solace.